Among other responsibilities, the Federal Energy Regulatory Commission ("FERC" or "the Commission") approves and issues construction certificates for interstate gas pipelines and related infrastructure under section 7 of the Natural Gas Act ("NGA"). Section 7(c) of the NGA requires that any person seeking to construct or operate a facility for the transportation of natural gas in interstate commerce must obtain a certificate of public convenience and necessity from FERC. FERC’s 1999 Statement of Policy - Certification of New Interstate Natural Gas Pipeline Facilities - outlines the evaluation standard for issuing a certificate of public convenience and necessity. Once a certificate application is filed, the gating question is whether the project can go forward without subsidization by the pipeline’s existing customers. If that threshold requirement is met, FERC determines whether the applicant has sought to eliminate or minimize adverse effects on existing customers, existing pipelines in the market and their customers or landowners and communities affected by the route of the new pipeline. If the proposed project has no adverse effects, the Commission proceeds to a preliminary determination or a final order. However, if there are residual adverse effects - after efforts have been made to minimize them - FERC balances the evidence of public benefits achieved against the residual adverse effects in a economic test, and then proceeds to environmental and other reviews if the benefits outweigh the adverse effects. 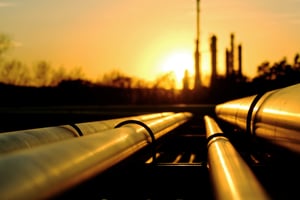 During the last few years, FERC’s decision-making on pipeline applications has led to much litigation and policy debate, and that debate is continuing with no apparent resolution in sight. In March 2017, President Trump issued a wide-ranging "Energy Independence" Executive Order requiring, inter alia, the review and reconsideration of any rule that might burden development of domestic energy sources, particularly oil, gas, coal, and nuclear energy. The Order rescinded an Obama Era directive that federal agencies performing National Environmental Policy Act ("NEPA") project reviews must consider greenhouse gas ("GHG") emissions and other climate change-related impacts. NEPA requires that before taking a major action, which includes action on an application for a natural gas project, an agency must take a "hard look" at the environmental consequences of the proposed action and disclose its analysis to the public. This analysis is provided in an Environmental Assessment ("EA") or Environmental Impact Statement ("EIS"), depending on the magnitude of the action.

Despite the President’s directive, in August 2017, the D.C. Circuit Court of Appeals ruled in Sierra Club v. FERC, 867 F.3d 1357 (D.C. Cir. 2017) that FERC had failed to adequately analyze the downstream impacts of GHG emissions in approving a Southeast Market natural gas pipeline project extending from Georgia to Florida ("SMP Project"). The Court vacated the Commission’s approval and ordered FERC to prepare a new EIS. In March 2018, FERC reinstated the project’s certificate of public convenience and necessity. In its order, the Commission found that the supplemental EIS had adequately quantified downstream GHG emissions from use of the natural gas transported on the SMP Project and that such quantification provided context for the downstream GHG emissions in comparison to annual state and national GHG emissions. However, in response to the Sierra Club court’s inquiry, the Commission stated "there is no way to determine the significance of [those] emissions using the Social Cost of Carbon tool or other methodologies." Florida Southeast Connection, LLC; Transcontinental Gas Pipe Line Company, LLC; Sabal Trail Transmission, LLC, 162 FERC ¶ 61, 233 at P. 58 (2018); see also Sierra Club, 867 F.3d at 1375.

Based on the supplemental EIS, the Commission found that the project remained an environmentally acceptable action, and, "is consistent with the criteria discussed in the Certificate Policy Statement." Id. at P. 61. Therefore, the Commission concluded it was "requir[ed]" to approve the project. Id. The two Democratic Commissioners - Cheryl LaFleur and Richard Glick - both dissented from the order. Although Commissioner LaFleur agreed that the project was in the public interest, she stated the Commission needed to "more squarely address" GHG emissions and the social cost of carbon. Commissioner Glick stated that FERC’s order on remand failed to provide a "reasoned answer" to the D.C. Circuit’s inquiries.

These dissenting opinions exemplify FERC’s struggles in determining whether, and if so how, to evaluate GHG emissions in its pipeline application deliberations. In December 2017, then FERC Chairman Kevin McIntyre announced that the Commission would review its 1999 pipeline approval process, presenting an opportunity to consider the role of GHG emissions in the agency’s approval process. Subsequently, in April 2018, FERC issued a Notice of Inquiry ("NOI") seeking comments on its approach to gas pipeline project evaluations.The comment period closed on July 25, 2018, following an extension period.

In the midst of the comment period, the FERC commissioners voted 3-2, along party lines, denying a rehearing on its issuance of a certificate of public convenience and necessity for the New Market pipeline in New York. In its decision, FERC did an about face from its supplemental EIS in the Sierra Club v. FERC case, stating, "[f]or a short time, the Commission went beyond that which is required by NEPA, providing the public with information regarding the potential impacts associated with unconventional natural gas production and downstream combustion of natural gas even where such production and downstream use was not reasonably foreseeable or causally related to the proposals at issue." Dominion Transmission, Inc., 163 FERC ¶ 61, 128 at P. 41 (2018). The Commission further stated: "[i]t is the Commission’s policy to analyze upstream and downstream environmental effects when those effects are indirect or cumulative impacts as contemplated by CEQ’s regulations. When those effects are not indirect or cumulative effects, and thus are not environmental effects of the proposed action, the Commission is not required to consider them under NEPA." Id. at P. 42.

In July 2018, an environmental non-profit, Otsego 2000, Inc., filed a petition in the D.C. Circuit challenging this decision, arguing, among other things, that FERC’s New Market decision is an arbitrary and capricious departure from Sierra Club v. FERC. Moreover, New York Attorney General Barbara Underwood wrote to FERC calling the rehearing denial "procedurally and substantively wrong." The environmental group filed its brief with the D.C. Circuit on November 26, 2018.

Similarly, in June 2018, the Commission denied a rehearing of its order authorizing construction and operation of the Mountain Valley Pipeline in West Virginia and Virginia, and a related project connecting into Pennsylvania. In seeking the rehearing, a coalition of nonprofits had argued that FERC failed to adequately analyze the climate change impacts of the end use of natural gas to be transported by the pipeline, and did not adequately consider climate change in the context of evaluating public benefits under Section 7 of the NGA. Significantly, the FERC majority concluded that it "d[id] not believe GHG emissions from the downstream use of natural gas transported by the project fall within the definition of indirect impacts or cumulative impacts." Mountain Valley Pipeline, LLC; Equitrans, L.P., 163 FERC ¶ 61, 197 at P. 270 (2018). In August 2018, FERC again denied a rehearing on an order authorizing construction of the PennEast pipeline project extending from Pennsylvania to New Jersey, stating that its review had gone beyond what NEPA required and that it had appropriately used a qualitative approach in analyzing climate change effects. PennEast Pipeline Company, LLC, 164 FERC ¶ 61, 098 at P. 111, 119 (2018).

On the other hand, the federal courts consistently have sustained challenges to FERC’s pipeline approvals. For example, ongoing litigation involving the Keystone pipeline has halted the project’s progression. In March 2017, two groups representing indigenous peoples and conservation interests filed a lawsuit, Indigenous Envtl. Network v. United States Dep’t of State, in Montana federal district court, challenging President Trump’s issuance of a presidential permit for the project. The issuance of the permit superseded then Secretary of State John Kerry’s 2015 denial of the permit, which found the project was not in the national interest, in part due to climate change concerns. Most recently, in November 2018, the court vacated the record of decision issued for the presidential permit and enjoined further construction or operation of the pipeline, requiring the U.S. Department of State to complete a supplemental environmental review. Indigenous Envtl. Network, 2018 U.S. Dist. LEXIS 191510 at *60-61 (D. Mont. 2018). The court determined the Department of State failed to comply with NEPA and the Administrative Procedure Act (APA) in reversing the 2015 permit denial because it did not provide an explanation for disregarding the Obama Administration’s findings concerning the impact of climate change. Id. at *57-58. Moreover, the court found the Department of State did not take a "hard look" at environmental impacts or at alternatives - as required under NEPA - including, among other things, the cumulative effects of greenhouse gas emission from the Alberta Clipper expansion and Keystone. Id. at *58-59. Further, on December 7, 2018, the court ordered that TransCanada Corp. may not proceed with pre-construction pipeline activities while the U.S. Department of State conducts its supplemental environmental review. Indigenous Envtl. Network v. United States Dep’t of State, 2018 U.S. Dist. LEXIS 216379 at *19 (D. Mont. 2018).

The uncertainty surrounding the agency’s application of climate-related criteria in its recent pipeline evaluation policy has been further exacerbated by several personnel changes at the Commissioner level. In August 2018, Commissioner Robert Powelson left the Commission. In October 2018, Chairman Kevin McIntyre, who initiated the review of the 1999 pipeline approval policy, relinquished his leadership role for health reasons. President Trump then tapped Commissioner Neil Chaterjee to retain his former position as Chairman. Moreover, on December 6, 2018, President Trump's pick to fill the Powelson vacancy, Bernard McNamee, narrowly passed confirmation in the Senate, 50-49.[2] The close vote largely was due to a video that surfaced from a February 2018 speech in which Commissioner McNamee criticized renewable energy and environmental groups and called for a "unified campaign" to support fossil fuels. While at the Department of Energy, Commissioner McNamee also helped craft a Notice of Proposed Rulemaking ("NOPR") to subsidize coal and nuclear power plants by providing cost recovery for plants with onsite fuel supplies.

Although the role of GHG emissions remains unsettled in FERC’s consideration of pipeline approvals and certifications, recent orders suggest the Commission at best will conduct a limited review of climate-related impacts. While this approach may satisfy the President’s Executive Order rescinding the Obama Era directive that federal agencies performing NEPA project reviews must consider GHG and other climate change-related impacts, it runs contrary to the recent court decisions that consistently have required broader consideration of GHG impacts – both upstream and downstream. Moreover, it is unknown what further action, if any, the Commission will take in response to its NOI regarding the 1999 pipeline approval policy. No developments have occurred since the comment period closed on July 25, 2018.

Thus, heading into the new year, stakeholders must stay attuned to find out whether, and if so to what extent, the Commission considers GHG emissions and climate impacts in evaluating pipeline approval requests.

[1] In June 2018, the U.S. Environmental Protection Agency Office of Federal Affairs ("EPA") submitted comments to FERC's NOI. Among its suggestions were that FERC incorporate several evaluative tools into its GHG impact analysis, including quantifying upstream and downstream emissions, and greenhouse gas reporting programs. EPA also suggested monetizing the impacts of GHG emissions by incorporating an estimate of the social cost of carbon and other greenhouse gases into benefit-cost analyses ("BCA") of actions that have "small, or marginal impacts on cumulative global emissions." However, a month later, EPA clarified that its comment was not taking a position or suggesting FERC use these tools, but rather was intended to note that these tools were available.

[2] Commissioner McIntyre passed away on January 2, 2019; thus a 2-2 split among the Commissioners remains.

Jeffrey Karp is of counsel and Kevin Fink is a law clerk with Boston-based law firm Sullivan.