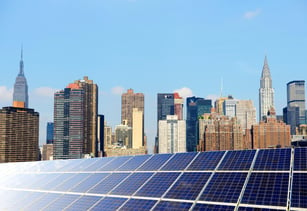 The Clean Energy Standard (CES) Order is a companion to a State initiative already underway called Reforming the Energy Vision, or REV. REV creates a transformative competitive framework for increasing the use of locally-sited or “distributed” energy, energy efficiency, energy storage, and customer load controls, collectively referred to as Distributed Energy Resources or DER. REV is seeking to establish a locational market-based platform through which DER resources are priced and may be bought, sold and traded. REV also includes an initiative to promote development of large-scale renewable projects to be integrated into the State’s electricity grid.

The CES order primarily focuses on three large-scale resources to supply the bulk of electrical supply needed for the State to achieve its ambitious 50x30 goal:

The plan to subsidize nuclear power plant operations is sure to be the most controversial aspect of the CES program.

To maximize the reach and uniform application of the clean energy program, the DPS establishes a renewables mandate not merely for utilities subject to its rate jurisdiction such as investor-owned utilities, but also retail energy service providers (ESCO’s). In addition, the CES Order applies to the Long Island Power Authority (LIPA), the New York Power Authority (NYPA), municipalities, and companies that purchase power from the New York Independent System Operator (NYISO).

The DPS solicits public comment on certain aspects of the Order and directs NYSERDA to implement other portions of the Order. Notably, the Commission solicits comments to seek to ensure that its clean energy standards are designed to “expand energy development by retaining and creating investor confidence” by “providing clarity and certainty to investors in implementing the Program.” The highlights of the CES program are as follows:

The CES program is centered on a Renewable Energy Standard (RES). The RES is effectively a compliance obligation placed upon Load Serving Entities (LSEs) such as investor-owned utilities and retail energy service providers (ESCOs) to procure a target percentage of their generation mix from renewable resources. The procurement can be accomplished in three ways: (1) building new renewable facilities, (2) entering into power purchase agreements with third party renewable developers and (3) purchasing Renewable Energy Certificates (RECs), including from NYSERDA. The Order allows LSEs to choose to meet its renewable obligations by making an “Alterative Compliance Payment” or ACP. The ACP effectively acts as a ceiling on the price entities will pay for RECs.

NYSERDA will continue its program of providing cash incentives to third party renewable developers through solicitations and Statewide procurement in exchange for receiving the project’s RECs (which NYSERDA will in turn sell to LSEs and others to meet their respective RES obligations). A New York Generation Attribute Tracking System (NYGATS) operated by NYSERDA will provide a liquid trading platform for RECs in New York. Renewable resources may register their project’s environmental attributes to qualify them for RECs eligible for sale to LSEs and others.

In addition to RES requirements, the DPS envisions the development of a thriving “voluntary” green market, and encourages market participants to go above and beyond the mandatory thresholds to create and participate in a green energy products market that achieves additional greenhouse gas reductions.

The 2030 target of 50% renewable resources is allocated to individual LSEs and others based on an allocation formula tied in part to the LSE customer’s percentage contribution to the total System Benefits Charge (a DPS mandated charge to customers that is levied by distribution utilities and used to fund renewable energy incentives among other programs). The actual target of MWh in any period may be adjusted based on a number of factors. Among other things, LSE targets may be impacted by other market activity that includes retail, end-user participation in opt-in or other voluntary programs, energy efficiency, behind the meter third party renewable investments, conservation and other variations in demand and supply. Creation of a voluntary REC market that generates “additionality” is hoped to have an impact that will result in renewables consumption above and beyond the CES goal.

The CES Order focuses on large-scale resources that can help the State meet its goals. Offshore wind is viewed as a potentially abundant energy resource in New York. The CES Order therefore sets a path for “steel in water” development.  Depending upon the distance from the shoreline, offshore wind projects will either be in state or federal waters.  The jurisdictional complexity inherent in offshore wind project development therefore requires coordination of clear state and federal programs and policies.

With support from the State, the Deepwater Wind Project, a 90 MW project off the coast of Montauk, Long Island, has been going through the regulatory review and approval process. A coalition including NYPA, LIPA and Con Edison has also submitted a proposal for an additional project off the coast of the Rockaway Peninsula of Long Island.  Both project areas are far-enough off the coast to qualify as the “Outer Continental Shelf” (OCS), which is under the jurisdiction of the federal government and the Bureau of Ocean Energy Management (BOEM).

NYPA, LIPA and Con Edison’s unsolicited project was denied by BOEM, and BOEM will now seek proposals in a competitive bidding process. The bidding process for the identified wind area is just under way. A Proposed Sale Notice (PSN) issued by BOEM, which is open to public comment, provides detailed information concerning the area available for leasing and proposed leasing terms. The PSN comment period also serves as the timeframe during which any company wishing to participate in the final lease auction may submit a qualification package.  Currently, there are seven companies that are already qualified to participate in the potential auction for the New York Wind Area.

State action will be necessary to implement the Deepwater and other offshore wind projects to run new transmission and distribution lines to the site, as well as provide for a stable offtaker to provide the required assurances for a financeable energy project. The CES Order includes a “program to maximize the value potential of new offshore wind resources,” and DPS directs NYSERDA to “identify the appropriate mechanisms the Commission and the State may wish to consider to achieve this objective.”

Warming up to Nuclear Power

Nuclear generation has a long history in New York. Several State plants are nearing the end of their useful life and are planned for retirement. Many nuclear plants, such as Entergy’s Fitzpatrick nuclear plant in upstate New York, have high operation and maintenance costs and are no longer economic. These plants generate a tremendous amount of energy - around 16% of the State’s overall energy. However, due to high operation and maintenance (O&M) expenses and low natural gas prices, coupled with their inability to quickly ramp up and down to respond to demand, these plants are not competitive in the NYISO market.

DPS has expressed concern that shuttering these plants could lead to their replacement by fossil fuel resources. This in turn would threaten the emissions reductions achieved through low-carbon programs. Therefore, the CES Order provides nuclear plants with a separate tier that includes a premium payment to avoid this result.

Nuclear electric generation will have its own designated emissions allowances called zero emissions credits, or ZECs. LSEs will be required to purchase a certain percentage of ZECs, and the required level will be set by NYSERDA.  To procure and allocate ZECs, NYSERDA will enter long-term contracts with nuclear facilities that are considered “at-risk.”  Plants within the Tier 3 category include Entergy's Fitzpatrick, Exelon’s Nine-Mile Point and Ginna nuclear facilities, but not Entergy’s Indian Point nuclear plant. The 43-year old Indian Point nuclear reactor has faced a series of safety and operational problems, and Governor Cuomo has called for the plant to be permanently shut down.

Shortly following issuance of the CES Order, Exelon agreed to purchase Entergy’s Fitzpatrick nuclear plant for approximately $110 million. Following the purchase Exelon will own all three nuclear plants in the State eligible for ZECs.

The effect of the ZECs is to create a price floor for nuclear energy. Providing these base load plants with a price subsidy is a legally uncertain area as it raises Constitutional questions under the Supremacy Clause regarding the authority of a State agency to set rates in an area that may be preempted under federal law, in this case, FERC jurisdictional authority. Only recently, in 2016, the U.S. Supreme Court in Hughes v. Talen Energy Marketing struck down a plan in Maryland to incentivize the installation of a new in-state power plant by providing it with a price floor that would allow the plant to competitively bid its power into the PJM power pool. The Supreme Court found that the rate incentive interfered with the FERC’s exclusive jurisdiction to set prices for the wholesale sale of power into PJM.

DPS anticipates these potential challenges. The DPS distinguishes its actions by arguing, among other things, that: (1) the Supreme Court has not directly barred bilateral power purchase agreements outside of the ISO competitive process; (2) the ZEC payment is not for electric power but, rather, for the environmental attributes or REC’s from the plants, an area that the FERC has stated is outside the purview of its rate authority; (3) the ZECs quantify the environmental benefits to New York caused by lowering carbon emissions and thus have an independent rational basis; and (4) the State has clear authority over the health, welfare and environmental protection of the State and its citizens. While the ZECs may have an impact on wholesale rates, the Supreme Court has recognized that such incidental impact on wholesale rates is a permissible exercise of state authority.

The CES Order lays out additional details on how the State plans to achieve its clean energy goals, and in what areas it intends to rely upon the private market to help it meet those targets. The order emphasizes the need for its rules to not only attract outside capital, but to insure that the program is sufficiently competitive with clean energy programs in neighboring states to attract these projects to New York.

The Commission has solicited comments on various aspects of the clean energy program with an eye toward having LSEs implement the program and commence their obligations by the beginning of 2017. The Order lays out an ambitious program that pushes the boundaries for new renewable generation, including paving the way for offshore wind, while announcing a major policy turn in deciding to preserve and maintain portions of the State’s nuclear fleet in operation. The DPS has sought to carefully balance its desire for utility financial stability with its commitment to attracting competitive renewable energy development to the State, on-shore and off-shore.  Only the future will tell if the State has struck the right balance.