As seen in the first six months of President Trump’s Administration, the country is on a rollercoaster ride.  There is much uncertainty regarding the implementation of new policies and the status of existing programs throughout the government.  Nowhere is this sentiment more evident than in the environmental and energy arenas.  President Trump is quickly trying to undo the Obama Administration’s programs through executive orders seeking to roll back regulations; the appointment of faithful supporters of deregulatory agenda to key positions; significant budget cuts that substantially reduce agencies’ head counts and defund targeted programs; and the helping hand of a Republican-controlled Congress.

However, achieving this desired goal is easier said than done.  President Trump’s objectives may be tempered by legal, procedural and resource constraints, bureaucratic resistance combined with delays in filling key agency decisions, and higher priority domestic agenda items and world events.  This article will examine what already has occurred and what may be in store on significant issues involving energy and the environment.  It also will highlight aspects of the Trump Administration’s deregulatory efforts and the proposed budgetary impacts.

Out of the gate, the new administration has pursued an aggressive deregulatory agenda. President Trump’s operative goal is to “deconstruct the administrative state.”  His administration is building on campaign rhetoric to “roll back” “economy-choking regulations,” and implementing his campaign promise to “Drain the Swamp” by reining in and shrinking the federal bureaucracy.  For example, in January 2017, President Trump issued the “2-for-1” Executive Order (EO) on Reducing Regulation and Controlling Regulatory Costs, which specifies that agencies must repeal two existing regulations for every new significant regulatory action.  The EO further requires cost balancing between new and repealed regulations and a net cost of zero for any new regulations.  In response, Non-Governmental Organizations (NGOs) and others, led by the Natural Resources Defense Council (NRDC), are challenging the validity of the EO in the U.S. District Court for the District of Columbia, arguing that the executive order is “arbitrary, capricious, an abuse of discretion, and not in accordance with law.”  In April 2017, the Department of Justice filed a motion to dismiss the complaint on the President’s behalf, and the NGOs moved for summary judgment in May.  Attorneys General from 14 states filed a brief in support of the EO.  The case is in limbo, as the court has not yet ruled on the parties’ motions.

In February 2017, President Trump issued another EO, on Enforcing the Regulatory Reform Agenda, which requires designation of regulatory reform officers and task forces in all agencies and departments.  Each task force must identify “all regulations that are unnecessary, burdensome and harmful to the economy.”  In addition to internal deliberations, the task forces have asked stakeholders to help identify troublesome regulations.  For example, the Commerce Department sought public comment on government regulations interfering with domestic manufacturing.  Of the 168 comments submitted, 79 called out the EPA, the majority of which cited the Clean Air Act (CAA) and Clean Water Act (CWA). 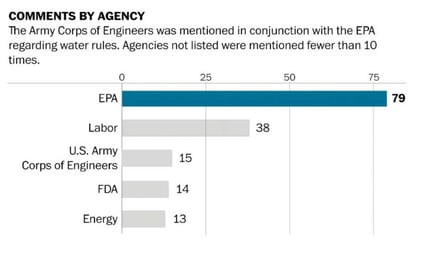 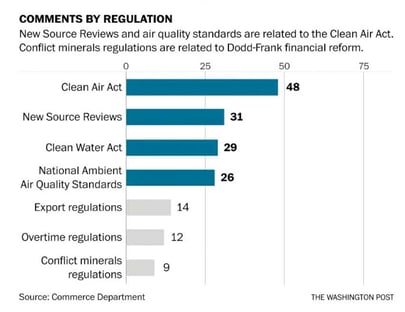 President Trump is particularly focused on curtailing EPA programs from the Obama Administration’s regulatory agenda.  For example, the EO on Enforcing the Regulatory Reform Agenda requires EPA to review, and either rescind or revise, the Clean Water Rule promulgated by the Obama Administration in 2015 under the CWA.  The CWA regulates discharge of pollutants to “navigable waters,” defined as waters of the United States (WOTUS).  The 2015 WOTUS Rule was issued by EPA and the Army Corps of Engineers (Corps) after a series of court decisions failed to adequately clarify the EPA’s jurisdictional scope.  The 2015 WOTUS Rule created quite a controversy because it applies to streams serving as tributaries to navigable waters, as well as wetlands adjacent to traditional navigable waters or interstate waters.  For the rule to apply, the wetlands and tributaries must be “relatively permanent.”  Under prior court decisions, this means such water bodies could be “intermittent.”  The Sixth Circuit stayed the 2015 WOTUS Rule soon after its promulgation.  Therefore, it was never implemented or enforced.  On January 13, 2017, the U.S. Supreme Court agreed to resolve the jurisdictional dispute over whether a district court or a court of appeals should decide the rule’s validity.

On March 6, 2017, EPA’s “Notice of Intent to Review and Rescind or Revise the Clean Water Rule” was published in the Federal Register.  In Senate testimony delivered on June 27, 2017, EPA Administrator Scott Pruitt stated that the agencies intend to revoke the 2015 WOTUS Rule, contending that the rule has created substantial uncertainty for farmers, ranchers, and landowners because they cannot tell whether their streams or dry creeks are “relatively permanent.”  Pruitt further stated that the rule inhibits development because landowners face substantial civil penalties if they incorrectly assess the rule’s coverage and the property is determined to be subject to federal jurisdiction.

Revising or revoking rules is not a perfunctory or simple process. The agency that promulgated the rule must follow the same Administrative Procedure Act (APA) notice and comment procedures to rescind or change it.  Thus, an agency cannot simply revoke a rule and subsequently replace it to satisfy the policies of a new administration.  Rather, an agency first must create an Administrative Record (AR) that supports revoking an existing rule, and then the agency must conduct a separate rulemaking proceeding to promulgate a new revised rule.  Ultimately, the AR must justify a different outcome than the record upon which the existing rule was issued.  This same process must be followed for each rule that an agency desires to abolish or revise.

On June 27, 2017, EPA and the Corps announced a plan to replace the 2015 WOTUS Rule in two steps: 1) repeal the stayed Obama-era rule, and 2) commence a second rulemaking to replace it.  However, on July 12, 2017, a House subcommittee approved an energy and water spending bill that would allow EPA and the Corps to withdraw the 2015 WOTUS Rule “without regard to any provision of statute or regulation that establishes a requirement for such withdrawal.”  Essentially, if the bill is passed, the agencies could bypass the APA procedures, including the public notice and comment period, and repeal the 2015 WOTUS Rule.  The House is expected to vote on the bill in the next few weeks.  The Senate Appropriations Committee’s version of the energy and water bill does not include language allowing the Trump Administration to bypass APA procedures.  Thus, a reconciliation of the bills likely will be necessary.

The Administration’s effort to eradicate Obama Era environmental regulations is further complicated because many rules presently are tied up in court proceedings awaiting oral argument or court rulings.  The EPA sought to stay challenges to such rules while the new administration reconsiders their scope and breadth.  In several cases in which oral arguments have not been heard yet, the requested relief was granted.  However, the agency’s strategy was foiled in the case challenging the Clean Power Plan, the most contentious of the Obama Era rules.  In that case, an en banc ruling is pending in the D.C. Circuit.  On April 28, 2017, rather than grant EPA’s request for an indefinite stay, the court agreed only to hold the litigation in abeyance for 60 days, while ordering the parties to file briefs addressing whether the case should remain on hold, or whether the court should close it and remand the rule to EPA for disposition.  On May 15, 2017, both parties submitted their briefs.  The motions are pending.

President Trump also is seeking to use the budget process to pursue his deregulatory goals.  The Administration’s 2018 proposed budget, sent to Congress on May 23, 2017, would reduce EPA’s funding by nearly one-third, eliminate thousands of jobs, and scrap dozens of existing programs.  The budget proposal would increase funding in a select few areas — for water and air rulemaking, and the TSCA-Chemical risk review and reduction program; however, it is expected that much of the additional TSCA funding would be offset by a “pay to play” scheme under which the companies requesting such reviews would be required to pay for them.  On the other hand, government wide programs that address climate change and global warming would be obliterated.  The Integrated Risk Information System (IRIS) program, which assesses the health risk of toxic chemicals, is specifically targeted for termination.  The Science Advisory Board is recommended for an 85% cut, and EPA’s categorical grants to states to operate and enforce delegated programs are slated for a 45% reduction.  The Chesapeake Bay and Great Lakes initiatives would be eliminated, as would programs supporting energy efficiency and R&D, and loan guarantees for clean energy technologies.  Nevertheless, Congress has the final say over President Trump’s budget proposals, and it remains to be seen whether there is sufficient support for his substantial proposed budget cuts.

We anticipate a steady stream of lawsuits will be filed by NGOs and, perhaps, some activist states challenging the Trump Administration’s deregulatory actions.  We also expect an uptick in “citizens suits” seeking to enforce environmental laws and regulations due to EPA’s diminished role as the “cop on the beat.”  Further, the impact of President Trump’s budget proposal largely will depend on the willingness of the Republican majority in Congress to eliminate or reduce funding for programs with traditional bi-partisan support.