The U.S. District Court for the Southern District of New York has dismissed the much-publicized claims by Leone Meyer against the University of Oklahoma and related Oklahoma public officials and insitutions for the return of La bergère rentrent des moutons by Camille Pissarro, currently in the Fred Jones, Jr. Museum of Art. In full disclosure: I represented David Findlay, Jr., Inc. in the action, who was dismissed from the action last year by agreement. 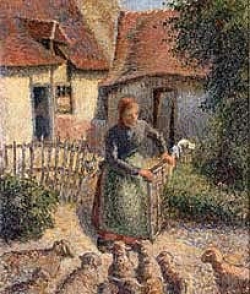 Meyer alleged that the painting was stolen from her father Raoul in France by the Vichy regime in cooperation with the occupying Nazi forces. After the war, she alleges that Raoul located the painting in the possession of a Christoph Bernoulli in Switzerland. In its motion to dismiss, the Oklahoma defendants produced a copy of a Swiss judgment over title to the painting, a judgment which acknowledged the likelihood that the painting had been stolen, but finding that Bernoulli was a good faith purchaser and therefore the true owner. As we have discussed many times, that is a critical difference between U.S. and Continental law. Meyer also sued my client and others in New York, alleging that the painting had been sold at the David Findlay Galleries in 1956 to Aaron and Clara Weitzenhofer, the couple who eventually bequeathed it to the Fred Jones, Jr. Museum. Recently, she also added the American Alliance of Museums (AAM) and the Association of Art Museum Directors (AAMD), arguing that those organizations had failed to enforce their membership rules, and that those rules wer contacts of which Meyer is the intended beneficiary. We discussed the parameters of third party claims last year when the lawsuit against the Metropolitan Museum of Art over its admission policy was dismissed.

The court did not reach the merits of any of the claims. Instead, it held that Oklahoma is not sufficiently present in New York to justify being sued. there This is known as “personal jurisdiction,” and it relates fundamentally to the fairness and due process of conducting a lawsuit in a particular place. Each state has what is called a “long arm statute,” which sets forth the circumstances under which a defendant may be sued in that state’s courts. Even then, a fairness analysis under the 14th Amendment is necessary, to ensure that the lawsuit comports with due process.

This dismissal is without prejudice, meaning that Meyer could bring it again (in Oklahoma, for example), though equally without prejudice will be Oklahoma’s right to assert its other defenses cited so far (e.g., statute of limitations, and sovereign immunity).

The claims against the AAM and AAMD, and one or more non-operational entities named “Findlay” are technically still in play, though the judge made fairly plain that she does not view any remaining basis to have a case in New York. Rather than requiring those defendants to respond, Judge McMahon has required the plaintiff to justify within fourteen days why the case should continue.

On the non-judicial front, Meyer has been applying considerable political pressure, which has found some reception in the Oklahoma legislature, though to what effect is far from clear.