My column in Apollo Magazine on museums and deaccessioning in crisis

Continuing our ongoing tracking of the effect of the Covid-19 lockdown on museums and arts organizations, I penned a column in Apollo magazine today. You can read the full article here (subscription required for more than three articles), the first paragraph is reprinted here as a teaser:

One key question for museums boards, management, and their supporters to ask right now is this: what do they actually want to accomplish when the Covid-19 crisis subsides and the lockdowns end? Is a museum its collection, its location, its staff or its visitors? Until recently we had the comparative luxury of asking these questions one museum crisis at a time. Should a small museum (for example, the Berkshire Museum in Pittsfield, Massachusetts) survive at all costs without the collection that created its very importance? Should it seek a better home for its collection but perhaps lose some of its unique character or even its individual existence (see the Corcoran Gallery of Art’s merger with the National Gallery of Art in Washington, D.C.)? Or should it evolve in a way that is perhaps contrary to its founders’ specific desires (the Barnes Foundation’s move to Philadelphia from the truly sui generis yet remote home in Lower Merion created by Dr Barnes)? 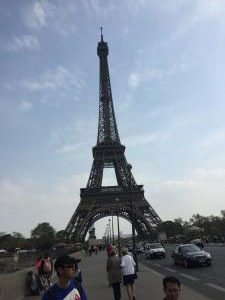 I am looking forward to participating next month in a symposium entitled :"Ethics and Cultural Patrimony: Viewpoints" at L'Ecole du Louvre in Paris on October 20-21, 2015. The event is organized by L’Institut Droit Ethique Patrimoine (Institute of Law, Ethics and Heritage), in partnership with l’Institut d’Etudes de droit public (Institute of Public Law Studies) and l’Ecole du Louvre, and take place at the Ecole du Louvre, Palais du Louvre, porte Jaujard, place du Carrousel, 75001 Paris. The conference website (with registration) can be found here, and the brochure can be opened here.

The Art, Cultural Institutions and Heritage Committee of the International Bar Association (of which I am a member) will be sponsoring an event March 26-27, 2015 at Sotheby’s in London. The IBA Individual Tax and Private Client Committee is also a co-sponsor, in connection with the IBA European Regional Forum. Sotheby’s is located at 34-35 New Bond Street in London.

Glass Half Full or Half Empty? Detailed Report Published on Worldwide Efforts to Restitute Nazi-Looted Art Since the 1998 Washington Conference

After the 1998 Washington Conference on Holocaust Era Assets and the eponymous Washington Conference Principles on Nazi-Stolen Art that came out of it, it is hardly surprising that a recurring theme has been to assess the progress of those nations that participated and signed on. Equally unsurprisingly, those assessments are usually more anecdotal than empirical, and usually arise out of a particular case or cases in the context of that country’s response.