Irony is Dead: PETA Sues for Copyright Infringement on Behalf of the Animal in the “Monkey Selfie” 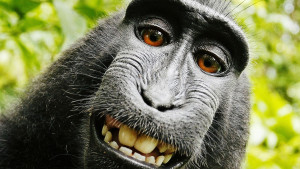 In a year that began with the vagaries of Left Shark, we have our most bizarre art law story of 2015—so far. Last year, the United States Copyright Office released a public draft of the Third Edition of the Compendium of U.S. Copyright Office Practices. Among the new items that leapt out at practitioners was the section of examples of non-copyrightable works, which included “A photograph taken by a monkey.” The Copyright Office was inspired to include this example because of a 2011 photograph taken by British nature photographer David Slater. A crested black macaque picked up Slater’s camera and pressed the shutter button, and the result became known as the “monkey selfie.” While as I said at the time, I thought the point was debatable to the extent that Slater could intentionally have left the camera within reach of the animal the same way that leaving something exposed to nature could still result in a copyrightable work, the question was obviously (I thought) limited to whether or not Slater could restrict reproduction of the work as the author.

UPDATE: Left Shark Not Free to Roam the Oceans of Intellectual Property Just Yet

UPDATE: The battle over Left Shark is not over yet! Upon closer examination, last week’s trademark-related denial involved only one of six classes (Class 41 for “live musical and dance performances”) covered in Katy Perry’s application to register a front view of the Left Shark. The Patent and Trademark Office rejected the specimen she submitted to prove use of the image as a service mark. The specimen in question was a photograph taken from the Super Bowl performance. Despite this initial rejection all of Perry's applications are still very much in play.

I participated in a podcast on Friday about the denial of a portion of an application for trademark recognition to Katy Perry for the "Left Shark" phenomenon. You can listen to it here.

In the afterglow of the spectacle of this year’s confusing yet captivating Super Bowl halftime show (Go Pats!), we mused about the art law ramifications of the unexpected birth of the visual Left Shark phenomenon, the costumed dancer who was famous within seconds for a certain lack of enthusiasm. The initial discussion focused on whether the dancer’s costume design within the show itself allowed Perry to control its use as a matter of copyright. The recipient of one cease and desist letter disagreed, both humorously and persuasively, principally based on precedents about costume designs, and on the nature of the use itself. Left unresolved were any arguments about fair use, but those seemed clear to us as well: a T-shirt, Twitter post, internet meme, SportsCenter commercial, etc., that evokes some level of post-modern world-weariness in contrast to Perry’s boisterous beach-party theme should be transformative enough even for the strictest of copyright constructionists. It is not clear on the public record though how much of a fight there has been over that point.

The Super Bowl is America’s biggest civic holiday, in many ways. The country’s most popular sport combines with the country’s desire just to sit and watch television in a once-a-year event. This year did not disappoint, in one of the most exciting contests in the game’s history, the New England Patriots prevailed over the Seattle Seahawks 28-24, sealed by a game-winning drive by Tom Brady and a last-minute interception by Malcom Butler.