There has been some renewed interest in the case a decade or so ago involving a claim by the heir of Oskar Reichel’s family to a painting in the Museum of Fine Arts Boston: Two Nudes (Lovers) by Oskar Kokoschka. In response I’ve decided to post an excerpt from my book A Tragic Fate­—Law and Ethics in the Battle Over Nazi-Looted Art (ABA, 2017).

It has been suggested that the MFA somehow concealed its rationale or the documentary evidence on the basis of which it concluded that the painting should not be restituted.  That is simply not so, however. The MFA’s now-curator of provenance, Dr. Victoria S. Reed, authored and the MFA filed an exhaustive report of the museum’s research into the case, accompanied by primary source documents. Whether one agrees or disagrees with its conclusions, the report has been publicly available for more than eleven years. It’s no secret that I have been complimentary of the MFA’s provenance research and transparency in the case—and I don’t think anyone would accuse me of being unsympathetic to claimants generally.

The key reasons for the MFA’s conclusions that the painting had not been sold under duress included the fact that Oskar Reichel’s sons pursued restitution claims vigorously (and successfully) for both real and personal property, including paintings. They never identified this painting in their claims to looted property, however. In addition, the MFA found­—and filed publicly—correspondence from Oskar’s last surviving son Raimund from 1982 that explained that the MFA painting was among those that Oskar had given to Otto Kallir to sell in the USA:

The MFA drew the conclusion, to which there was no specific evidence to the contrary, that this was in contrast to the property that had been taken from Oskar. This is in the context of the general presumption of invalidity for transactions between 1933 and 1945 involving persecuted groups.

I have been very critical of museums that I believe have not adhered to the spirit of the Association of Art Museum Directors’ guidance on Nazi-looted art claims where I think it is appropriate. But in my opinion—and that’s all it is, my opinion—the MFA is an example of a museum worthy of praise for following those principles of research and transparency (and not only with regard to Nazi-spoliation, but its collection generally).

Please do note that some of the analysis of the applicable statute of limitations has been superseded by the 2016 Holocaust Expropriated Art Recovery Act (HEAR Act), but the case went to a final judgment before that law was passed and was thus not affected by it.

I urge you to consider the case with an open mind and reach your own conclusions. I have done my best to explain my thinking, which you may judge for yourself. The press coverage at the time was very critical (some of which resonated for me until I reviewed the case in detail), which in hindsight is probably attributable in part to the fact that I don’t recall any contemporary coverage that addressed specifically the actual research that the MFA did and made public.

The following is re-published with the permission of the author, and may not be copied, reproduced, or republished in any fashion without express written permission of the author, whom you may contact using the links on this page. A Tragic Fate­—Law and Ethics in the Battle Over Nazi-Looted Art © Nicholas M. O'Donnell (2017) is available in hardcover and Kindle editions on Amazon.com. I hope you find it informative and thought provoking. 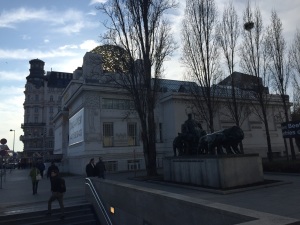 As expected, the Austria’s Advisory Committee (Der Beirat gemäß § 3 des Bundesgesetzes über die Rückgabe von Kunstgegenständen aus den Österreichischen Bundesmuseen und Sammlungen, BGBl. I Nr. 181/1998 i.d.F. BGBl. I Nr. 117/2009, (Kunstrückgabegesetz)) issued a decision on Friday with respect to the Lederer family’s claim to the famous Beethoven Frieze. In a lengthy opinion, the Committee recommended against restitution, prompting widespread speculation about what the claimants would do next. The mural is installed at Vienna's iconic Secession Museum (my photograph of the museum exterior, taken today, is below), and is one of the icons of fin-de-siècle Vienna.

The Second Circuit Court of Appeals has affirmed the judgment against David Bakalar concerning ownership of the drawing Seated Woman with Bent Left Leg (Torso). It is a notable decision first and foremost because it affirms the District Court ruling on the merits of whether the drawing was stolen by the Nazis from the Austrian-Jewish collector Fritz Grünbaum—finding that it was not stolen. Such a ruling is a rarity among wartime restitution cases, the overwhelming majority of which continue to founder on statutes of limitations and jurisdictional defenses. Ironically, even though the court ruled that the work was not stolen and that the current owner could not prove good title, the current owner still prevailed. The details are the key to understanding this case, best described in the District Court decision that the Appeals Court affirmed.