First Painting Restituted from Gurlitt Trove to be Sold; Appellate Court in Munich Breathes New Life Into Will Contest

After the restitution of the first two works of Nazi-looted art from the trove of works found in the apartment of Cornelius Gurlitt, David Toren has announced his intention to auction his work, Two Riders on the Beach by Max Liebermann. Toren, now more than 90 years old, remembers the theft of the painting from his uncle David Friedmann in Breslau (now Wrocław). Toren is the only claimant to date to have filed litigation over the Gurlitt case. Sotheby’s will auction the work on June 24. Toren explained his motivation for the sale as follows:

There have been multiple and conflict reports in the last 48 hours about whether the Kunstmuseum Bern had reached a decision to accept the inheritance from and appointment as heir by Cornelius Gurlitt. Gurlitt, who died in early May shortly after reaching an agreement with the Bavarian prosecutor concerning the 1,280 works of art seized from his apartment on suspicion of Nazi-looting connections, unexpectedly named the Swiss museum as the sole beneficiary of his will, and as his heir and representative. Just last week, the news was that the Kunstmuseum had resolved to decide by late November, no later than six months after being advised of Gurlitt’s bequest. 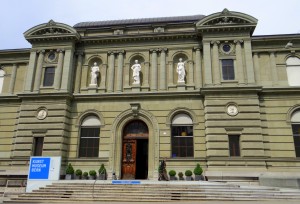 Almost none of the legal issues flowing from the seizure of some 1,280 works of art from Cornelius Gurlitt’s apartment in 2012, his agreement with the Bavarian prosecutor, and the ongoing review of the collection for connections to Nazi looting can be resolved until his named heir—the Kunstmuseum Bern—decides whether or not to accept that appointment. When the one-year review deadline passes (with only two public recommendations made so far), it is entirely unclear who will stand for Gurlitt’s "rights" over what is left.

Eileen Kinsella at ArtNet news reported today that the Gurlitt Taskforce has recommended the restitution of the Max Liebermann painting Riders on the Beach (Reiter am Strand) to David Toren, a New York man who left Germany at age 14 in 1939. His great uncle David Friedmann lived in Breslau, the capital of Silesia (now part of Poland, known as Wrocław). The Nazis catalogued and seized Friedmann’s art collection in 1939-40, and the Liebermann painting appears on those records. It was later found among those 1,280 objects seized from Gurlitt a little over two years ago when he aroused suspicion returning from Switzerland with a large amount of cash.