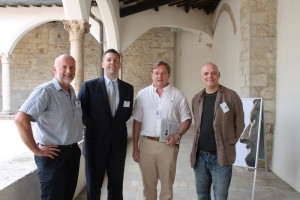 It was my great privilege last year to speak at the 5th Annual Art Crime Conference, hosted by the Association for Research into Crimes Against Art (ARCA). The conference, in Amelia, Italy, annually draws experts in varied fields of law, cultural property, archaeology, law enforcement, and more. It is also held in one of the most spectacular venues I have ever seen, a rocky outcropping , with a medieval Italian city on top of a Roman-era settlement (complete with a cistern at the top of the hill).

The blog of ARCA, the Association for Research into Crimes Against Art, has been running a series of recaps of the June conference in Amelia, Italy at which I was a presenter this past year. The summary of my panel is here (which also included Jerker Rydén and Joris Kila), moderated by Judge Arthur Tompkins, a District Court Judge in New Zealand), and the site contains similar recaps of the other panels. They are worth a detailed read, recalling a fascinating weekend in a stunning locale. Anyone interested in the topics should review the posts and consider the conference and ARCA's summer program.

I will be speaking at the 5th annual Art Crime Conference held by ARCA (Association for Research into Crimes Against Art) in Amelia, Italy between June 21-23, 2013. My talk will address Holocaust restitution litigation in the United States, similar to the paper I gave in Maastricht in March but covering important more recent developments as well (notably the Hungary case).