Late Tuesday evening—the day after Memorial Day no less—the United States Office of the Solicitor General filed a brief amicus curiae in our clients’ pending case against the Federal Republic of Germany and the Stiftung Preussischer Kulturbesitz for restitution of the Guelph Treasure (in German, the Welfenschatz). This brief was in response to the Supreme Court’s invitation in January that the SG file a brief expressing the views of the United States. In an unprecedented abdication of 80 years of leadership redressing Nazi-looted art, the Solicitor General argued that there is no circumstance in which a Nazi-forced sale victimizing a German Jew in the 1930s could constitute a violation of international law such the Foreign Sovereign Immunities Act would confer jurisdiction over either Germany or the SPK. The U.S. government has taken the position that only property claims against non-Germans suffice—even though, of course, the U.S. government has acknowledged in every relevant context since the early 1940s that Jews ceased to be full members of German society on the day Hitler assumed power: January 30, 1933. This is an historic disgrace. Germany has rightly been shamed for minimizing in court over the last five years the genocidal character of its persecution against Jews, but for the United States to do so the day after we rightly honored the hundreds of thousands of Americans who died to defeat Nazi Germany is appalling.

I am honored to be one of the presenters at an upcoming symposium at Brandeis University entitled "Looted Art for Sale" that was postponed last winter. This interdisciplinary conference will provide an international perspective on the last twenty years of art recovery. Speakers include former Ambassador Stuart Eizenstat, a primary leader in the creation of U. S. restitution policies, Kim Oosterlink, Victoria Reed, and Inge Reist.

"Looted Art for Sale" will be sponsored by the Brandeis Center for German and European Studies, the Rosenberg Institute of Global Finance at Brandeis International Business School, the Mandel Center for the Humanities and the Department of Fine Arts.

My presentation will be entitled “Who Makes the Rules? The High-Stakes Legal Conflicts Over Looted Art.” I can scarcely claim to belong among such excellent company, so if for their perspectives if not for mine, I encourage anyone interested to attend.  Registration is available here.

Paintings by Beckmann, Gris and Klee Valued at Nearly $20 Million That Once Belonged to Flechtheim Are at Issue in New York Lawsuit

Sullivan & Worcester LLP has filed suit against Bavaria and its state museums in U.S. District Court in Manhattan on behalf of our clients Dr. Michael Hulton and Mrs. Penny Hulton, heirs to the renowned and persecuted Jewish art dealer Alfred Flechtheim.  The Hultons have asked the United States District Court for the Southern District of New York to restitute several paintings by Max Beckmann, Paul Klee, and Juan Gris that are now in the possession of the German federal state of Bavaria, Adolf Hitler’s and the Nazi party’s homeland, and its Bavarian State Paintings Collections (known in German as the Bayerische Staatsgemäldesammlungen, or BSGS).  We are aided in this case by our co-counsel Markus Stoetzel and Mel Urbach, Esq.

Journalists Catrin Lorch Jörg Häntzschel published this weekend an explosive revelation in Sueddeutsche Zeitung entitled “the Munich Looted Art Bazaar,” reporting on the work of the Commission for Looted Art in Europe (CLAE): the government of Bavaria sold artworks returned to it after World War II by the famed Monuments Men that were supposed to be restituted to the victims of Nazi looting.  Not only was the art given back to the German state on the explicit condition that it be restituted to the victims of Nazi art plunder, in some cases it was literally returned to the families of Nazi officials, such as Emmy Goering (Hermann’s daughter) and Henriette von Schirach rather than to the victims themselves.  Less than a month after the Federal Republic of Germany’s toxic and revisionist reply brief in the Welfenschatz case (which argued, among other things, that individual claimants cannot sue because the U.S. policy was this national level restitution), the ramifications are far reaching for Germany’s self-professed adherence to the Washington Conference Principles on Nazi Looted Art of 1998.  While the specific artwork in question may be less significant than most of the works found in Cornelius Gurlitt’s apartment four years ago, the revelation is in many ways much, much worse.  The CLAE scholarship that lead to this schocking development cannot be praised enough.

The Wall Street Journal published an editorial today by Ronald S. Lauder entitled “Time to Evict Nazi-Looted Art From Museums.” Lauder, the one-time U.S. Ambassador to Austria, current President of the World Jewish Congress, and Honorary Chairman of the Board of Trustees of the Museum of Modern Art in New York, is a frequent commentator on questions of stolen art. He was, for example, a reliably-available quote on the Gurlitt affair: on Germany’s steps to deal with it (or criticism for Germany’s action) and the question of stolen art in German museums. But a prominent case several years ago involving a museum with which Lauder himself is involved suggests that perhaps over-simplification is not the answer.

The Main Post has an article today (in German) by Christine Jeske tracing the late-war and post-war trajectory of Hildebrand Gurlitt and his now-infamous collection. The article is fascinating, and sheds considerable light on how the collection came through the war and how Gurlitt evaded greater scrutiny that might have revealed the trove’s whereabouts earlier. It also puts into context any claim Cornelius Gurlitt might now have to argue he took possession of the paintings from his father unaware of their provenance—what will be a critical argument, particularly if yesterday’s Cultural Property Restitution Law proposal by Bavaria becomes federal law in German.

German Museums Join in Demands for More Information About Gurlitt; Links to the Amber Room Theorized; Dix Painting Was Not Unknown 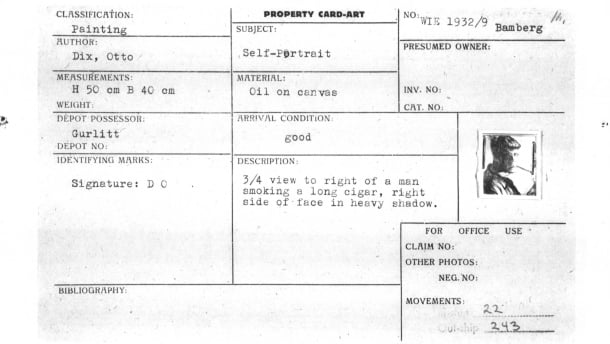 Der Spiegel reports today (link in German) about how German museums are joining the chorus of frustration about the lack of information about the Hildebrand and Cornelius Gurlitt collection find. From this perspective, this development is not a surprise. I was speaking to an international law class last night at Sarah Lawrence College, and one of the students asked me what the reaction in Germany would be. My feeling was that sooner rather than later, the German museum community, and likely the federal government, will push for a forward-looking solution. Present-day Germany takes questions about the Holocaust quite seriously, and for this collection to have turned up in Germany is sparking an embarrassment that could lead to more decisive action. The problem right now seems to be that everyone is waiting for someone else to make the first move.

Paintings Targeted by the Nazis Found in Munich, Could be Biggest Discovery Since the War. What Now?

The German magazine Focus broke a story over the weekend that could be the biggest restitution news since Portrait of Wally or Altmann v. Republic of Austria: roughly 1,400 paintings were found in a Munich apartment that may have been seized, looted, or sold bought under duress by the Nazis in the 1930s as part of their drive to purge what they called “degenerate”—but extremely lucrative—art (the Focus coverage is extensive and excellent, though fair warning, in German). The paintings, which were apparently recovered not recently, but in 2011 as part of a customs seizure related to a currency declaration of all things, include works by Pablo Picasso, Henri Matisse, Marc Chagall, Emil Nolde, Franz Marc, Max Beckmann, Paul Klee, Oskar Kokoschka, Ernst Ludwig Kirchner, Max Liebermann and Albrecht Dürer, from collections traced back to Paul Rosenberg and others who had to abandon their property during the war, all long thought lost to the destruction of the war. They are valued in excess of 1 billion euros.