The idea of moral rights continues to be a notable difference between European and American intellectual property rights with respect to visual arts. Last week’s decision by the U.S. Court of Appeals for the 9th Circuit in a case brought by artist Chuck Close and others addressing the California Resale Royalty Act (the CRRA) underscores those distinctions. In holding that the CRRA is mostly preempted by federal copyright law and thus can be applied to entitle artists to secondary royalties only for sales of art in a single calendar year—1977—the 9th Circuit affirmed the skepticism with which American law continues to regard anything other than classic copyright. Given the failure of efforts to pass national legislation to provide for resale royalties, this decision is probably the end of the line for the foreseeable future in the U.S. for droit de suite, the term of art used to describe the concept.

There is, for better or worse, clearly no political constituency for resale royalties in the U.S. As I told Law360, and as we’ve opined before about the Visual Artists Rights Act of 1990 (VARA), property rights are in many ways a quintessential American policy. We all reflected on the Declaration of Independence last week, and its proclamation of the primacy of Life, Liberty, and the Pursuit of Happiness—which revised John Locke’s famous statement that governments are instituted to secure “life, liberty, and property.” Copyright is and always will be a limitation on absolute ownership, but Americans guard those limitations jealously. There is little sign that will soon change.

I am pleased to report on the outcome of a matter we announced in February.  After a disagreement with the City of Palo Alto (California) about her sculpture Digital DNA, Sullivan & Worcester LLP client Adriana Varella has agreed to relocate the sculpture to the campus of Harvard Business School.  The agreement is a positive outcome that ultimately did not require litigation, and a reminder of the importance of artists’ rights under the Visual Artists Rights Act of 1990 (“VARA”).  I was honored to be able to work with this incredible artist to preserve her importance sculpture and begin an exciting new chapter for her art.

Sullivan & Worcester LLP has taken action on behalf of its client, artist Adriana Varella, to protect her sculpture Digital DNA from removal and destruction by the City of Palo Alto, California.  Digital DNA has stood in the heart of Palo Alto for nearly 15 years, and is widely beloved by the community.  In that time it has been recognized for its compelling message about the effect of technology on society.

After a recent discussion about whether the new Fearless Girl sculpture by Kristen Visbal in Lower Manhattan might implicate the copyright of the earlier Charging Bull sculpture that has been there for nearly three decades, the sculptor who created Charging Bull has stepped to the foreground to complain that the recent installation infringes his rights.  In addition to copyright arguments, that artist (Arturo di Modica) suggests that he has a moral rights claim under the Visual Artists Rights Act of 1990 (17 U.S.C. § 106A).  But since Charging Bull predates VARA it is probably ineligible for any protection.  Even if it were eligible, the elements of VARA rights are not implicated by the installation of The Fearless Girl because nothing has actually happened to Charging Bull.  Artistic confrontation is not “distortion, mutilation or other modification” under VARA.  In short, none of the arguments he advances would bestow on him the kind of right to be asked first that he proposes.

There has been much discussion about the impact of the Presidential election on the art market, amidst much generalized anxiety about "fake news."  What about "fake art?"  Never one to be behind the curve, artist Richard Prince has stepped into the spotlight (to the extent he left).  Declaring that one of his controversial “New Portraits” works of Instagram posts of others that was sold to Ivanka Trump is “fake” and that he “denounce[s]” it, Prince raises interesting questions about what the legal ramifications of such a repudiation might be.  In this instance he has apparently refunded Ms. Trump’s money, but following on last year’s surprising Peter Doig trial (surprising that it got to trial, not that Mr. Doig won), a hypothetical artist making such a declaration might have some vulnerability under both common law, if not under the Visual Artists Rights Act of 1990, 17 U.S.C. § 106A (VARA).

The ongoing saga between Yves Bouvier and Dmitri Rybolovlev over Bouvier’s sale to the Russian billionaire of Leonardo’s Salvator Mundi (and a recent preemptive suit by Sotheby’s against the original sellers of the work to Bouvier) has cast unusual scrutiny over the often-private relationships between art dealers, art advisors, and their clients.  Chief among the issues between Bouvier and Rybolovlev is whether Bouvier’s resale to Rybolovlev at an allegedly markedly higher price than Bouvier purchased it for constitutes self-dealing by a trusted agent, or the time-tested adage of buy low, sell high.  This is a question of great significant for obvious reasons: in private sales the collector is often relying on the expertise of the art professional.  In any fiduciary relationship, however, it is axiomatic that the fiduciary agent (like an attorney or a trustee) cannot enrich himself at the expense of the beneficiary.  Whether Bouvier is indeed a fiduciary is a fiercely debated question for another day.

A recent dismissal in New York of a case about Cady Noland’s Log Cabin provides some welcome guidance on the contours of these relationships in the eyes of the law.  The finding that the defendant owed no exceptional duty to the plaintiff is a significant pushback against the expansive view of agency that Rybolovlev, among others, has advocated.  The decision clarifies that interaction with an expert does not elevate that expert to a position of undivided loyalty.  Rather, the terms of the relationship must be on of special trust and confidence.  The duties of actual fiduciaries are not changed by this decision, but it will help professionals and collectors understand who is, and who is not, filling that role.

If it Ain’t Broke?…Ninth Circuit Announces Curious Test of “Applied Art” Under VARA

The Ninth Circuit has ruled against two artists in a long-running dispute about a hybrid school bus creation at Burning Man more than ten years ago, a “galleon” named La Contessa. In announcing a test that focuses on whether the object is “utilitarian” to warrant protection under the Visual Artists Rights Act of 1990, 17 U.S.C. § 106A (“VARA”), the Court of Appeals has added an element that the statute does not contain. Namely, any artist that incorporates an object that once had an independent function must essentially ensure that the object does not work any more. Otherwise, the potential that it could resume its former function eliminates legal protection. So school bus with a Spanish galleon on top is “applied art” and ineligible for VARA protection, while a school bus attached to a wall is “a work of visual art.” It is a test that appears ripe for problems in the application. What is it about VARA that so bedevils interpretation? As we have often lamented, VARA guidance is somewhat rare, and often muddled. From here, this latest result is a continuation in that trend, particularly because it starts off by confusing the rights of attribution and integrity, which are different rights with different remedies. 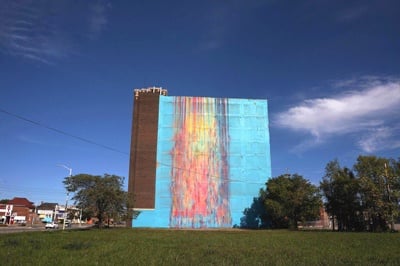 A recent injunction ruling that prohibited the destruction of the “Bicentennial Freedom Mural” in Corona, California had occasion to consider the rights asserted by the plaintiffs and artists under the Visual Artists Rights Act of 1990 (VARA), 17 U.S.C. § 106A. The order ultimately granted the injunction but on different grounds, holding that the plaintiffs were unlikely to prevail on their VARA claim.