Nick’s practice focuses primarily on complex civil litigation. He represents manufacturers, individuals, investment advisers, banks, and others around the world in contract, securities, consumer protection, tort and domestic relations cases, with particular experience in the German-speaking world. He is also the editor of the Art Law Report, a blog that provides timely updates and commentary on legal issues in the museum and visual arts communities, one of his areas of expertise. Nick is a member of the Art Law Committee of the New York City Bar Association. Additionally, Nick has authored and contributed to several books on art law: — A Tragic Fate—Law and Ethics in the Battle Over Nazi-Looted Art, (Ankerwyke/ABA Publishing, 2017) — “Public Trust or Private Business? Deaccessioning Law and Ethics in the United States,” in Éthique et Patrimoine Culturel - Regard Croisés, G. Goffaux, ed., (L’Harmattan, 2016) — “Vergangenheit als Zukunft? Restitutionsstreitigkeiten in den Vereinigten Staaen,” in Ersessene Kunst—Der Fall Gurlitt, J. Heil and A. Weber, eds., (Metropol, 2015) — “Nazi-Looted Art—Risks and Best Practices for Museums,” in The Legal Guide for Museum Professionals, Julia Courtney, ed., (2015, Rowman & Littlefield)

A new lawsuit seeking to seize a painting by Van Gogh currently at the Detroit Institute of Arts for the show “Van Gogh in America,” a painting which the plaintiff alleges was unlawfully taken has brought back into focus the law in the United States that address immunity from seizure. That is to say, what are the circumstances under which a work of art loaned on exhibition—even if stolen property—might nonetheless have to be returned to the lender? The results, and the criteria, are often surprising to the casual viewer but are important to review for museums, collectors, and anyone involved in art loans. 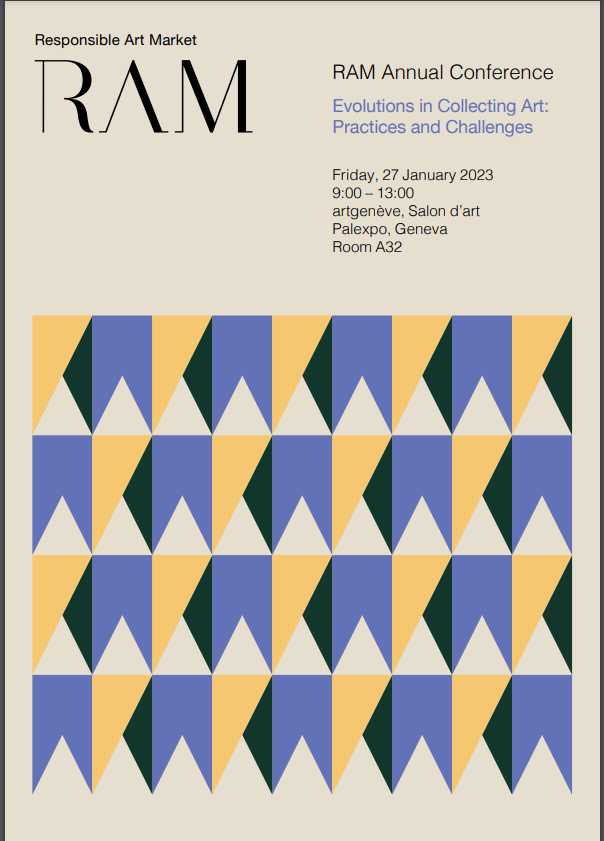 The Responsible Art Market Initiative will hold its 7th Annual Conference on January 27, 2023 at artgénève at the Palexpo in Geneva, Switzerland. RAM has been holding this event annually in parallel to the art fair in Geneva, and it has become a must-attend conference for trends in market practices, standards, and risks. Registration is open through tomorrow, January 20, 2023, so don’t miss out.

This year’s conference (program here) lives up to the standards set by past events. The conference will feature two panels, and a keynote introduction that I will present on relationships between collectors, artists and galleries.

New Law Requires Museums in New York to Display Information About Nazi Art Looting, May be More Complicated than it Looks

New York Governor Kathy Hochul has signed into law a new requirement requiring museums to indicate publicly any object in their collection that was displaced by the Nazis as part of what Congress has rightly called the largest organized theft of art in human history. The significance of this new rule is clear: New York is the center of the art world, and its museums hold a unique place of prominence. As readers of this blog or of my book A Tragic Fate-Law and Ethics in the Battle Over Nazi-Looted Art know, my view has long been that American museums vary widely in their candor and proactive approach to the issue of Nazi-looted art in their collections. Many have shown admirable initiative in probing their collections, while others have shown a regrettable passivity in waiting to receive and then deflect claims. Whether this bill will move the needle on that balance is the question. Transparency and disclosure have been the defining goals of the modern restitution era. This new law serves many of those ideals, but some unintended consequences may follow.

Responsible Art Market Initiative­--Intermediaries and Sustainability in the Art Market January 28, 2022 in Geneva

After a two-year hiatus, the Responsible Art Market Initiative is planning a return to its in-person annual conference at the end of this month in Geneva. For anyone who has attended RAM events or used its catalogue of guidance and best practices, this is exciting news and hopefully a chance to gather in a format that has been informative and enjoyable for many years now. As before, the gathering will be at the Palexpo in Geneva and the artgeneve art fair.

Stay tuned for registration information. Obviously conditions are changing rapidly, but I hope to see you in Geneva!