Fair Use and Transformativeness Pushback: Seventh Circuit Takes a Swipe at “Lazy Appropriators”

Much ink has been spilled over the new world order seemingly announced by last year’s Second Circuit decision in Prince v. Cariou with regard to copyright, fair use, appropriation art, and “transformativeness.” In a nutshell, while roundly criticized, most commentators have taken the Prince decision to announce the apotheosis of “transformativeness” among the fair use factors in § 107 of the Copyright Act. Prince looked at the four statutory factors and applied them in such a way that to be considered “transformative” was to qualify for fair use. Most troubling was the “know it when you see it” character of the opinion. The Google Books opinions took a similar view.

The Seventh Circuit Court of Appeals this week pronounced in Kienitz v. Sconnie Nation LLC its skepticism of that approach, to put it mildly. The court was presented with a claim by a photographer (Michael Kienitz) against defendants who made T-shirts using a photograph Kienitz had taken. Specifically, after seven-term Madison, Wisconsin mayor Paul Soglin took steps to shut down the city’s annual “Mifflin Street Block Party.” To express their frustration, the defendants made T-shirts with Soglin’s face and the phrase “Sorry for partying.” The image of Soglin’s face was from a Kienitz photograph, shown to the left of the T-shirt image: 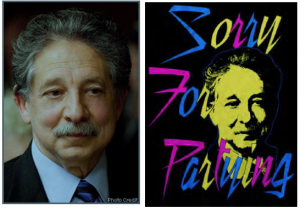 We’re skeptical of Cariou’s approach, because asking exclusively whether something is “transformative” not only replaces the list in §107 but also could override 17 U.S.C. §106(2), which protects derivative works. To say that a new use transforms the work is precisely to say that it is derivative and thus, one might suppose, protected under § 106(2). Cariou and its predecessors in the Second Circuit do not explain how every “transformative use” can be “fair use” without extinguishing the author’s rights under § 106(2).

The court instead returns to the four statutory factors:

(1) the purpose and character of the use, including whether such use is of a commercial nature or is for nonprofit educational purposes;

(2) the nature of the copyrighted work;

(3) the amount and substantiality of the portion used in relation to the copyrighted work as a whole; and

(4) the effect of the use upon the potential market for or value of the copyrighted work.

The court was dismissive of competing markets; no one would buy the T-shirt instead of the photo. Rather, the “amount taken in relation to the copyrighted work” caught the court’s attention. As Judge Frank Easterbrook put it,

Defendants removed so much of the original that, as with the Cheshire Cat, only the smile remains.

What’s most interesting though, is the criticism that the opinion levels at an over-reliance on the “transformative” question, the Second Circuit, and practically Richard Prince himself:

There’s no good reason why defendants should be allowed to appropriate someone else’s copyrighted efforts as the starting point in their lampoon, when so many non-copyrighted alternatives (including snapshots they could have taken themselves) were available. The fair‐use privilege under § 107 is not designed to protect lazy appropriators.

If that last sentence sounds familiar, it parallels a part of Campbell v. Acuff Rose, the very decision that introduced the phrase “transformative” and thus launched a thousand ships of analysis. Justice Souter, in that case, cautioned:

If [] the commentary has no critical bearing on the substance or style of the original composition, which the alleged infringer merely uses to get attention or to avoid the drudgery in working up something fresh, the claim to fairness in borrowing from another’s work diminishes accordingly (if it does not vanish), and other factors, like the extent of its commerciality, loom larger.

It is hard to see yet how long a shadow this case will case relative to Prince. For starters, Judge Easterbrook concludes with various ways that the case could have gone the other way. And, like it or not, appropriation art will continue to present a number of confounding questions under both fair use and the First Amendment. But for today, the pendulum swung a little bit the other way.