(WASHINGTON-July 2, 2020) The United States Supreme Court today agreed to hear the appeal by Germany and the Stiftung Preussischer Kulturbesitz (SPK) seeking to dismiss the restitution claim by the heirs to the so-called Guelph Treasure (known in German as the Welfenschatz). The claims arise out of the forced transfer in 1935 of the Guelph Treasure by a consortium of Jewish art dealers to agents of Hermann Goering, who personally presented it as a gift to Hitler. In 2018, the Court of Appeals for the D.C. Circuit held that U.S. courts have jurisdiction over the claim under the Foreign Sovereign Immunities Act of 1976 (FSIA). That appellate court had rejected the Defendants’ arguments that U.S. courts lack jurisdiction, and that Germany’s treatment of its Jews in the 1930s should be immune from judicial scrutiny.

Sullivan partner Nicholas M. O’Donnell said, “we are grateful for the opportunity to address the Supreme Court on these important questions about holding Germany accountable for its Nazi-looted art. A 1935 transfer from German Jews to notorious art looter and war criminal Hermann Goering is the quintessential crime against international law, regardless of Germany’s Holocaust distortion in defending this case. Germany seeks to eliminate recourse for Nazi-looted art and the Court will have the chance to answer this question of critical importance for Holocaust victims.” O’Donnell added, “this is also an opportunity to rebuke the Department of Justice and State Department, who turned their back on decades of U.S. policy by siding with Germany’s effort to keep Nazi-looted art.” 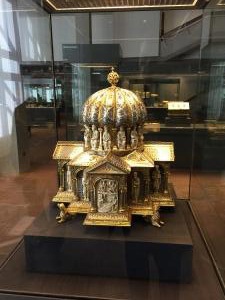 The Supreme Court will hear two questions: First, it will rule on whether suits concerning property taken as part of the Holocaust are within the expropriation exception to the Foreign Sovereign Immunities Act, or FSIA (28 U.S.C. § 1605(a)(3)), which provides jurisdiction over suits concerning property taken in violation of international law. Second, it will decide whether a foreign state may assert what is known as a comity defense that is outside the FSIA’s “comprehensive set of legal standards governing claims of immunity in every civil action against a foreign state.”
Germany has taken the position that Germany’s persecution of Jews in the 1930s was not a crime against international law at all (one of the requirements for the jurisdictional law in question, the FSIA) and can never form the basis of a restitution claim against it. The Court of Appeals rejected this argument in its opinion in 2018:

In this case, moreover, the Welfenschatz was more than just art. As Germany acknowledges, “the Consortium bought [the Welfenschatz] not for pleasure or display, but as business inventory, to re-sell for profit.” [] By seizing businesses’ inventory—like the other economic pressures alleged in the complaint, such as the “boycott of Jewish-owned businesses,” [] and “exclu[sion]” of Jews from certain professions, []—the Nazis “dr[ove] Jews out of their ability to make a living,” [] and thereby, in the words of the Genocide Convention, “inflict[ed] . . . conditions of life calculated to bring about [a group’s] physical destruction in whole or”—at the very least—“in part,” Genocide Convention art. 2(c).

Further, the D.C. Circuit rejected Germany’s incremental revisionism with regard to the beginning of Germany’s terrorizing of its Jews, holding that “Congress has expressly found that the Holocaust began in 1933.”

Germany has also argued that even if Plaintiffs’ claims met the requirements of the FSIA, the Court should abstain from the case out of respect for “international comity”—that is, dismiss the case and require the heirs to go through the fruitless exercise of pursuing court action in Germany that is doomed to fail. This too did not persuade the D.C. Circuit, because as that court held: “the heirs have no obligation to exhaust their remedies in Germany.”

The Guelph Treasure, also known in Germany as the Welfenschatz, includes dozens of gilded and jeweled reliquary artworks from the 11th to 15th centuries that long belonged to Prussian aristocrats from the House of Brunswick (Braunschweig)-Lüneberg. In 1929, the Duke of Brunswick sold off the collection, with part of it going to a consortium of art dealers owned by the plaintiffs’ ancestors and predecessors: J.&S. Goldschmidt, I. Rosenbaum, and Z.M. Hackenbroch.

In the 1930s, the Jewish ethnicity of those dealers brought them to the attention of Hermann Goering, whose titles as one of Adolf Hitler’s top Nazi deputies included not only Commander of the Luftwaffe and President of the Reichstag, but also Prime Minister of Prussia.

The works were obtained by Goering’s emissaries through a pressured transaction at a fraction of their worth, paid into blocked accounts to the members of the art owners’ consortium. Some of the owners had already begun preparations to flee Germany; others followed soon after, one never escaped. Fees demanded by Nazi authorities as the escapees fled were then stripped from the accounts through harsh “flight taxes,” as described in a Gestapo document.

Coerced selling of property was a common tactic of the Third Reich. Germany’s SPK has claimed that the transaction was done at the owners “free disposal.” But so pleased with the Guelph acquisition was Goering that, according to a 1935 report in the Baltimore Sun, he personally presented the collection as a “Surprise Gift” to Hitler.

Other documents show the then-Mayor of Frankfurt, shortly after the Nazi takeover, boasting in a letter to his “most revered” leader, “Reichskanzler (Chancellor Hitler),” about the potential to take advantage of the Welfenschatz’s owners and seeking Hitler’s personal assistance in setting the stage for the forced transaction. Another letter, concerning how to obtain the Welfenschatz from the Jews, is addressed to Paul Körner, a Nazi leader who later participated in the infamous Wannsee Conference in which Hitler’s “Final Solution” was formalized to oversee the extermination of all remaining Jews in Europe.

Sullivan brought the case in 2015 on behalf of Plaintiffs Alan Philipp, Gerald Stiebel, and Jed Leiber. Sullivan is assisted in this matter by co-counsel Markus Stoetzel and Mel Urbach, not affiliated with the firm.